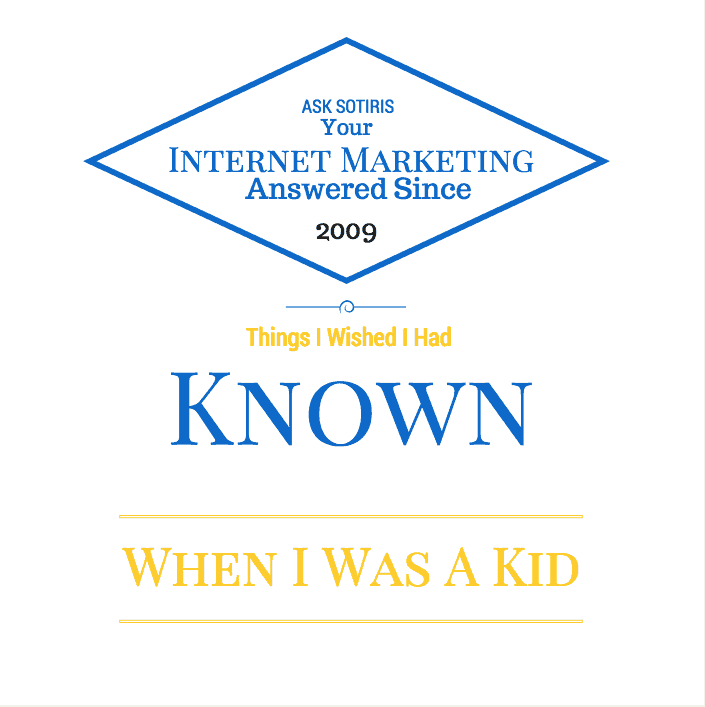 September 5, 2015October 8, 2015
Sotiris Bassakaropoulos
0 Comment on Things I Wished I Had Known When I Was A Kid

Yes I was told that when adults spoke you listened. So in the beginning it was kinda like people who have been brainwashed with the gospel. If you where told something by other adults it must be true right?

It’s something people do they learn from their parents and these teachings move down from generation to generation changing a little along the way.

Really today there are still lots of things being taught from our ancestors which are obsolete today, but people’s programming makes them continue on exactly the same path that they have been taught.

The crazy thing is some of those ideas might have come from ancestors who lived 500 years ago. Who believes a few things might have changed since then?

I remember my grandad, many years ago he used to work in Harland And Wolff that was the shipyard in Belfast that built the Titanic. He used to get and go to work at 6am every morning to go to work and knock his pan in all day building ships. So that he could pay the bills.

He would tell me stories of getting hit on the head with a sledghammer, having nails in his finger, getting his finger hit with the hammer etc. Living this lifestyle had a bad effect on him by the time he was 70 he had arthritis and found it very hard to walk.

His father before him had the same job also working on the Harland and Wolff shipyard and was one of the ones who worked on building the Titanic. Yes in those days that was what you do get a job in the only place you could. Why because that was the programming you where given.

Who knows if my grandpa had of read one or two books it could have completely changed his life. What if he had read a book like Rich Dad Poor Dad or actually stepped outside his life and thought what else could i do.

He could have lived a much longer happier and even better life but that is what programming can do to people.  They start running a program and then one day after 60 years they waken up and realise they are 80 years old and their life is nearly over.

And what have they done ?  The same bloody routine that kills them for 40 plus years.

I have a confession to make my eldest son thinks that a lot of the stuff I learn or teach is of no interest to him. So he wanted a game which is on special offer now normally I would buy them computers, games’tablets etc. But I noticed they don’t really look after or appreciate things as much that they haven’t bought themselves.

So I told him that I would pay him the money he needed if he reads 6 books by next week.

This education could and will possibly be worth hundreds of thousands or millions of pounds over his lifetime and what better way to get him in touch with something, he thinks that he isn’t interested in.

The books I gave him to read are.

The Cashflow Quadrant by Robert Kiyosaki

The Richest Man In Babylon

Last night he read the first hundred pages of Rich Dad Poor Dad and I got a lot of inquisitive questions as he was reading through the book.  Definetely a good sign :-).

I was about 26 years old and driving a taxi when a man told me about Robert Kiyosaki’s first book Rich Dad Poor Dad.

I  also play online monopoly and Robert Kiyosaki’s Cashflow 101 game from time to time with my kids as well.

Anyway back to topic of this blog post I was going to write about this but think it may make more sense to be put into a list.

Things I wished I had known as a kid.

Why should I learn from you?

Some life lessons I learned