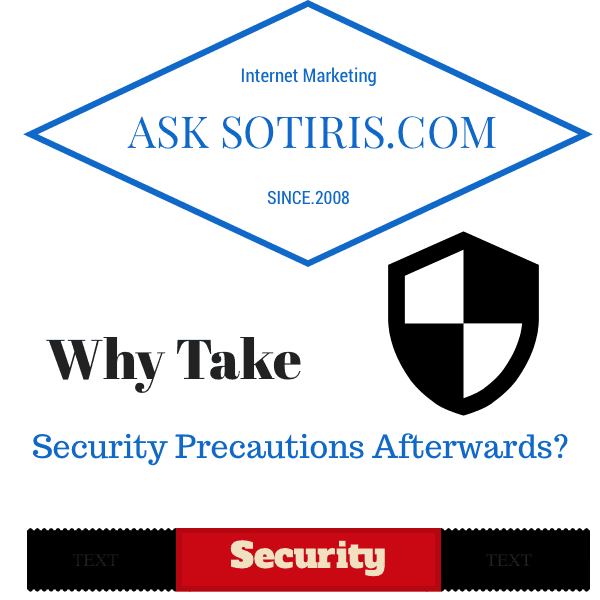 It is true unfortunately it is just human nature, many times we do not prepare for things in advance. Let me give you a few examples. When I was 17 I got my first car and I used to drive to college in Belfast every day. I just kind of assumed my car had locks on the door and a set of keys to start it with so when leaving it in the city centre while I was in college why would I need to worry about it right?

Wrong one day I was at college and went around the corner to buy a pay and display ticket for my car, by the time I came back three teenagers where in my car trying to hotwire it luckily it was only a minute or two and I shouted at them that is my car and they ran off.

After that I always wrapped a chain around my steering wheel and under the car seat plus put a steering lock and immobiliser on my car. Another day I let my dad borrow my car I told him to lock the steering wheel with the chain but he did’nt.  A few hours later I got a call from him the yellow fever has been stolen.

Yeah I had a 1979 Mark Two Yellow Ford Escort with a black leather interior and yes because of my dads lack of security it was once again stolen.   You may think that this was one of my only experiences of theft  but I had many.  One day I went to college on my bike I brought my chain but was late and in a hurry that day and forgot my padlock.

I had a £400 Road Racing Bike which I loved. There was a locked padlock attached to the chain because I was so late I didn’t have time to go back to my grandmothers house 30 mins away to get it so I wrapped the chain around the bike without attaching the padlock.  I left it to look like it was chained up.

After an hour I came back to check on it and it was gone. Somebody from the BBC next door it was beside my college stole it.  I saw it a few times about a year later but I  already been paid out insurance money for it so I didn’t bother.

Then a few years later roll on my 27th birthday I was hijacked at knifepoint by 3 guys and my Mercedes stolen.  The one thing I can tell you is after all of these incidents I took security very seriously for quite a while.  Then my house was burgled the back window was smashed and Silver a sound system games console and toolbox and some pearl pictures stolen.

I can tell you after these incidents my security increased tenfold for a few years anyway but the truth is we don’t expect to get robbed or our things destroyed so eventually many of us get complacent.  Let’s face it who wants to live a life thinking about who is going to steal your stuff, and about how and what can you do to protect it?  Nobody does really.

Move forward a lot of years It was about three or four years ago that I got 350 of my 650 websites defaced and hacked in one night.  Immediately afterwards I started blocking IP addresses adding wordpress security plugins etc.  Until finally I got it under control move forward a few years later I moved my sites from one large dedicated server to multiple shared hosting accounts.

And once again I discovered the other night I had been hacked once again this time my sites where not defaces just malware put on some of them.  So once again I went back on the defensive/offensive lol. I spent the day getting a coder to remove all the malicious code and installed anti hacking plugins on my blogs once again..

In case you haven’t done this it may be an idea to do it before your site get’s hacked too.  Of course if someone is going to hack you they are going to hack you.  That doesn’t mean that you should make it easy for them. Why should you. I was having a couple of good weeks lots of great commissions and suddenly was out a fortune buying more hosting accounts and getting websites fixed after the hacking.

What I did learn from this is that hostmonster is a completely rubbish company they don’t care about their customers at all.  Even though I had 5 servers with them they did not contact me to answer any of the complaints I made about their customer services and hacking protocols. My goal is to get all my stuff of their servers ASAP…

Moral of the story is think about the security before it happens even if you just make a few tweaks it may just end up being really worth it.  What do you think?