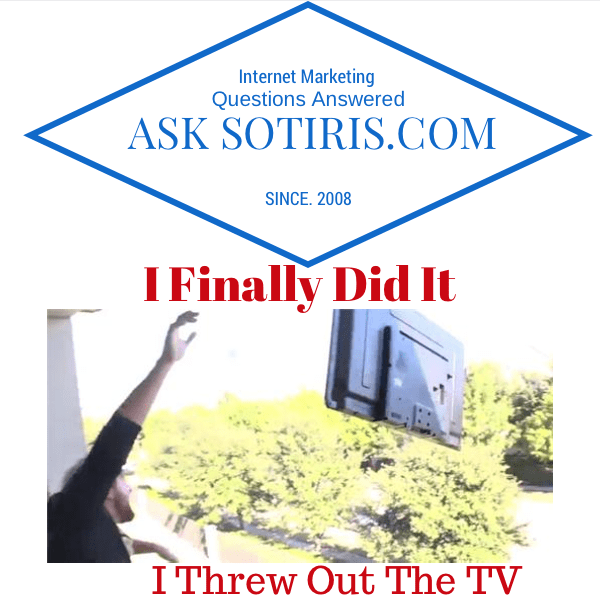 I decided a long time ago after being told in countless seminars to get rid of my T.V. The first time was 5 years ago in a Dolf De Roos Seminar in London. The reason most people have as an excuse for being unsuccessful in life is either not enough time or not enough money or countless other reasons.

One thing I have learned is you can make money or excuses but you can’t make both. One of the biggest excuses people have in life for their circumstances is normally down to time or lack of it, money or health,
We all have the same amount of time it just depends on what we decide to do with it that can make the difference in our lives.Our health or lifespan is not entirely up to us, though we can influence it in some cases by the things we do.
It is also important the influences that we surround ourselves with.Most of the media is sold on negativity death disaster calamity,disease,murder,and robbery.If you do not believe this look at one of the soaps or films you are watching on TV,and think about it. Or when you are watching the news do you hear many success stories and if so what is the ratio, compared to the negative stuff.
The same can be true for the people you surround yourself with, most people have an income on average to the 5 people they spend their time around the most.Think about that ! So if you really want to soar with the eagles make sure you aren’t hanging out with the turkeys. Negativity together with positivity can be contagious so decide which way you want to go and follow that path.A lot of negative people don’t even realise how negative they are but like Jim Rohn Says ignorance isn’t bliss, in fact Ignorance is a catastrophe.
When it comes to our dreams and the amount of time we have to fulfil them remember the time excuse many people have,The average person in the U.K. spends 8 years of their lives watching T.V so if you are one of those people quit watching the news sell your TV on Ebay or Gumtree. And start spending those extra 8 years you have been giving making improvements in your life,and turning your life into the life of your dreams.
If you would like to transform your life and the way you live